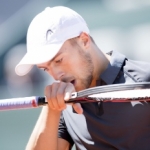 The best teams in Switzerland play in the „Interclub NLA“ to crown the Swiss Team Champion. The defending team of Froburg Trimbach will play against the contenders of Genève Eaux-Vives, Grasshopper ZH, CT Neuchâtel, Nyon and promoted teamSeeblick ZH. The championship is already organized by Swiss Tennis for the 105th time. Finals will be played on the  13th and 14th of August. You can follow all match live with Tennis-Ticker.